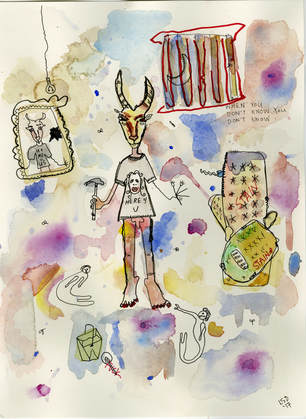 Image by Leah Sophia Dworkin
​On the Death of My Tamagotchi
I was drawn to its translucence
like the gummies I sucked
before ballet. Circuits and wires
exposed through a jellied sheen.
I pried mine from plastic jaws

a reward for perfect spelling tests
plus the bonus word that week:
oviparous. The slight weight of the
Tamagotchi in my palm was
a watery taste of maternity.

With the battery inserted, a handful of pixels
greeted the day. The Tamagotchi with its joyful
head bobs swayed in a modest
dance broken by stillness indicating hunger;
cheerfully flailing with a digital cherry.

I was a benevolent parent until I
left for school. In my absence, the Tamagotchi
poisoned by its own filth, slowly died leaving me
with nothing but a grey corpse
no words just simulated putrefaction.

I begged my mother to take away
the tiny egg to hide my shame high in her closet
but this wasn’t enough to wipe the
Tamagotchi from my mind: its
double-X eyes and a congregation of tiny flies

flickering in judgment. My inaction at 7
upset the balance and the universe
left me feeling accountable.
This is how I found myself capable of great violence;
how I began as a lifetaker.
I Date God for a While/It's Just Okay
because he likes it when I ask about
his writing, though I read his book,
with its rocks and seeds and fires.
I didn’t find it very good.
I tell him about the gemstones in an orange,
about speaking subalterns, red tide, and the deep web;

he praises me for my observation skills.
Each night, I try to remember the universe
as he has shown it to me, but I’m distracted by
white cheese and sweet wine. I tell him about my
research; when I recount his wars, I
ask if he regrets any. He smirks and says       would you?

After a couple drinks, he laughs about
Mesopotamia and tells me where to find the
third cradle of man. Like I care. Cradled men
never served me well. When I don’t heed
his convictions, he calls me sassy
because mortality is his kink and

he gets off on picturing me becoming
naked becoming bone becoming sand
becoming fiber in the light. He explains
how he’d take me against his thumb
and press me to a star. He gets annoyed
when I ask about the muses or the fates.

He claims there’s more to life than loving dead girls.
I break it off when I see him without his mask,
when he thinks I’m sleeping. With his head to the side
I see that he is vapor, sort of a milky smear
I see that it was posture and good lighting all along.
He doesn’t kiss me goodbye, I think better of him.
RITA MOOKERJEE'S critical work has been featured in the Routledge Companion of Literature and Food, the Bloomsbury Handbook to Literary and Cultural Theory, and the Bloomsbury Handbook of Twenty-First Century Feminist Theory. She currently teaches ethnic minority fiction and women's literature at Florida State University where she is a PhD candidate specializing in contemporary Caribbean literature with a focus on queer theory. Her current research deals with the fiction of Edwidge Danticat.